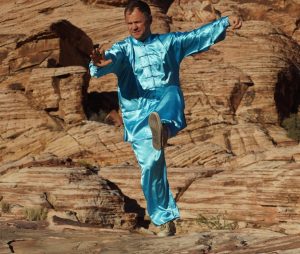 Emil Rechester‘s journey in the Martial Arts world started with Judo when he was 12 years old, and in  2 short years, he became a certified black belt rank holder and Regional Champion, holding that title for 3 consecutive years as well as earning many trophies and medals from different competitions. While doing Judo, Emil also learned Sambo (Russian style wrestling similar to Judo or Jiu-Jitsu) and traditional Jiu-Jitsu. The more he learned Martial Arts, the greater his thirst for knowledge grew.  In 1982 Emil learned Shotokan Karate, becoming proficient in Shotokan Karate Katas and free sparing.

For Emil, Tai Chi Chuan was love at first sight. He saw gentlemen practicing one of the forms of Tai Chi in the place where he came to do pre-competition sparring. Without any hesitation, Emil asked to learn this mysterious yet gracious art. That moment in 1987  marked the start of his journey in the “internal martial arts”,  in his home country Moldova (part of the former Soviet Union). Studying under his first teacher Alexander Dmitrienko, Emil learned the art of Standing Meditation, the Tai Chi Chuan 24 form, Taikiken, and various Qi-Gong sets.

After coming to America in 1994, he continued to master his craft with teachers of the caliber of Tim O’Connor (disciple of Mary Chou), learning Tung family Yang Style Long Form (108 moves), the ‘fast set’ created by Tung Yi-Jie and Yang Chen Fu, saber form, and different sets of Tui-Shou (push hands). Emil is always on the search for improvement, and in 2005 he met sifu Sam Tam. With master Tam he learned the Yang Style 37 short form created by Chen Man Ching and its applications in push hands. Constantly looking for an improvement Emil has studied advanced forms of Qi Gong and Tai Chi Chuan under the supervision of great masters like Sifu Mark Rasmus and James Lau King. In recent years Emil immersed himself into the mystical world of Wu Tai Chi Chuan (Shanghai) style learning various forms of Qi Gong, Push Hands, weapons  and applications from Master Yan Yuanhwa.

Emil is certified by ATCQA (American Tai Chi and Qi Gong Association), and can often be found in different parks of the Los Angeles or Las Vegas area, doing freestyle push-hands with his friend and students.

Hey Emil! I really appreciate your classes. It is a challenge, yet you make it easy and enjoyable to learn. It’s a sweet oasis of Heaven away from the wild world. I always leave super energized and I feel I’m progressing well. I appreciate being with the other smiling faces in the group, as well. Thanks so much!

“Emil’s teaching capabilities are natural. Emil likes to share and as an individual, he is generous, patient and compassionate…”

“I have known Emil for a number of years, and consider it a great opportunity to have been able to practice with him. He is one of those rare practitioner/teachers with a varied background and stylistically open mind, who has pursued the art of t’ai ji for its spiritual benefits as well as its practical martial arts and health applications. Highly recommended.”

Emil is a very gifted Teacher and it feels great to be able to practice under these beautiful trees on top of a hill 🙂 Truly a wonderful experience!

“Emil was generous to share with us not only what he learned but also what he was discovering through years of practice. While I have been studying tai chi far longer than Emil has, I have learned a great deal from him.”

I had the opportunity to join Emil last month for a very insightful push hands class. Emil is the real deal! He knows Chi and more importantly, knows how to teach others this very subtle yet powerful aspect of traditional Tai Chi Chuan push hands.

“My special interest is push hands. I have studied with Emil for only a few months, yet he has already opened up a whole new world of the internal arts to me. His martial technique is outstanding, and he has an unusual ability to articulate abstract concepts so they are understandable.”

Emil has a unique and highly effective teaching method, as well as a generous nature that moves him to share his many years of experience.  As a Push Hands teacher Emile uses his skill and sensitivity to guide you through a process of discovery that dissolves the distractions that get in the way of truly connecting, making it possible to experience the difference between contact and connection.  Working with him I have come to better understand the T’ai Chi Classics: ‘From familiarity with the c…

Terrific session this morning.. Good folks.. Great vibe.. Thanks once again, Emil, for the opportunity to connect with restorative activity. Namaste 🙂

Thank you Emil! This was a wonderful experience. For a beginner like me I was afraid not to be able to follow, but it was not bad at all! The warm-up helped a lot to get some understanding of the movement. The park is wonderful with plenty of parking.